Setting up a Test environment

So my web hosting is coming up for renewal shortly and I have been considering what options I have in terms of renewing it given the creation of My Book It. I need something fairly flexible and considered the option to migrate to a VPS type solution.

But before I move to that solution I decided that I might be able to setup a home environment and play with a few options like control panels etc, with that in mind I realized I needed a home server of sorts. (I also want to be able to test other items from this machine aswell)

It had to be cheap. It was only for testing so I didn’t want to spend a lot on it, with that in mind. I tracked down an old Acer Veriton S480G from work which was due to be thrown out so I grabbed it with the idea of using that as the base of my server.

I had a few Hard drives lying around so I added them. (A 2TB and a 750GB), I needed another network card as the on board is not supported at all in ESXi 5.1 or 5.5. So in the end for no cost I ended up with the following specs. (I use to hate reading blogs of people who threw together a server from parts lying around their home)

I want to be able to test a couple of items, so i decided on a hyper visor OS. My favorite is VMWare so I went with ESXi. I also wanted to boot from a USB drive as more and more servers I am installing are using this option, I added a 1GB USB drive that was lying around into the box using a USB ext cable from one of the back USB ports. I cut a small hole in a PCI back panel and fed the cable into the bottom of the box. (It is secured to other cables so it doesn’t get in the road of fans etc) 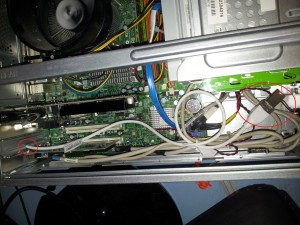 USB Cable looped back inside the machine to allow ESXi to be installed onto the flash drive.

The plan will be to install and boot from the USB drive, leaving me with the entire HDD space to play with for VM’s. I needed to change the BIOS settings for the SATA Controller from RAID or AHCI to Native IDE to get the USB drive to boot correctly once ESXi was installed. Not a huge issue, and set the machine to not halt on any errors.

So there you have it, for nothing (And if I had to pay for it, it would be well under $200) I have setup a test machine.