In my last post I talked about how I have set-up a IPv6 Tunnel to SixXS from my home router. With this all up and running I could now look at getting my LAN clients onto IPv6.

I run a few networks at home, 1 for my general devices, 1 for wireless devices and guests (phones etc), 1 for testing of Windows servers and a DMZ. Given that I have more then 1 network I opted to ask for a /48 from SixXS so I could allocated a /64 to each network. (This seems to be the standard thing to do). So after a week of keeping my tunnel up, I had enough points to requested a /48. This was allocated to me a short time later.

Now that I have all the IP addresses that I could ever need or want, it is time to set-up my home networks using both the original routed subnet and by splitting the /48 into /64’s to be allocated out to the various LANs

In the last post, I did all the configuration via the command line. This time I am going to swap over and do it via the Web GUI.

The first thing to do is to create all the objects that I need. To do this I logged into the D-Link and went to the Objects menu.

I have created myself a IPv6_Tunnel folder to place all of the IPv6 objects into and create the following objects.

Now all of the objects are setup, I need to get my clients onto the network. To do this I am going to use DHCPv6 to allocated IP’s to clients.

The setup of DHCPv6 servers is a piece of cake, just nagivate to Network –> Network Services –> DHCPv6 Servers.

Each server was easy to set-up. When promoted provide a name (IPv6_lan_dhcp), and interface (lan), and a /64 object (IPv6_lan_network)

Change the options to the following

Once the DHCPv6 Servers are set-up, your clients on the networks should start to receive an IPv6 address in the range allocated. Now to get them access to the Internet we need to set-up Router Advertisements for the networks.

This is a good moment to stop and point out a big difference here. In IPv4 the gateway is allocated via DHCP using option 003. In IPv6 you need to use router advertisements which is a very different way of thinking.

To set up one, navigate to Network –> Routing –> Router Advertisements

Click on the Add Button and select Prefix information. Again provide a Name and the network that this prefix will apply to (in this case IPv6_lan_network). I used the same network object as the DHCP server to make things easy if I wanted to update them in the future. (This way it updates both at the same time)

Check the On-Link Flag and disable the Autonomous flag option and save that prefix.

The last thing is that there are a few settings which D-Link recommend you change in the advanced section which you can see in the screenshot below. 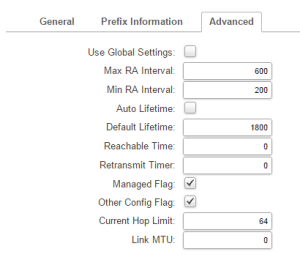 Now that that is all set-up there are just two more changes that need to be make to ensure everything works successfully.

The first is to change Multicast Hop Limit Min to 1 in System –> Advanced Settings –> IP Settings.

The last thing to create is a rule to allow the traffic to cross the device. I used the following settings, but they could be either more or less restrictive based on your needs.

That should be everything you need to get it working. The next step is check that the machines are recieving their addresses correctly and perform a test connection. (ping www.google.com /6)

And there you have it. IPv6 deployed across two networks (if you repeat the process for the guest network). I am going to look at adding it into the other networks at a later date but the process is fairly similar.

In my next post, I will review a few of the gotchas and just a bit of my thoughts about the transition that you may find helpful if you are doing the same move.